Having Gilles Peterson in town is bonus enough for many people. The influence he has had on building the appeal of black dance music in the UK is nothing short of amazing, and it was wonderful to hear him play the stellar 4hero mix of "I Am The Black Gold Of The Sun" at the Days Like This festival last weekend. 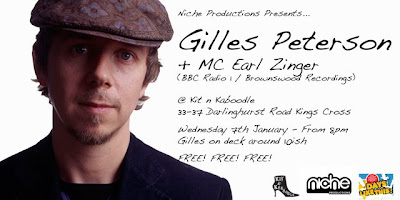 But on Wednesday we were treated to a second round thanks to a missed flight. So, with his MC Earl Zinger in tow, Peterson played a hastily-arranged three hour set in the cocktail lounge of Sydney's best new club space, The Sugarmill's Kit & Kaboodle. To match Peterson's well-known penchant for eclecticism, K&K has been designed on the basis that the elements shouldn't work together but do. It's an intense blue-green palette that dominates the cocktail lounge, with flashes of gold and silver glamming up an already glamorous scene. No complaints really on the choice of venue (helped by the fact it's my local!) but I wondered why choose the carpeted cocktail lounge rather than the equally sized club (with dedicated dancefloor) one floor below?

Gilles' set was, as expected, a hugely mixed bag. I think that while on radio he is a genius for pushing disparate styles, in a club environment it can be hard to grasp the thread of what he's doing. We went from disco to funk to house to broken beat and hip-hop, with one atrocious euro-pop sounding tune in the middle. At times the segues (using every CDJ-1000 trick he had up his sleeve) were inspired, and at others the flow simply collpased and had to be recovered. Still, he played some blinders (Eartha Kitt! Omar feat Stevie! Herbert!) .

Once the hip-hop and broken beats became prominent after midnight, I felt that things had taken a turn for the wetter and eventually departed for some needed sleep. But it was a top night, with a nice crowd and lots of friends to bump into.

Kudos to Huw and the crew for putting this on, and for DLT, you've been lighting up my January so far!

Some tracks 'spotted on the night: