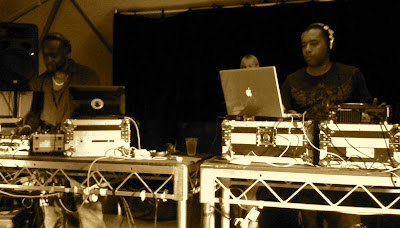 Music festivals these days tend to leave me feeling ambivalent, with their fragmentary taste of numerous acts piled onto multiple stages. Not only do you have to run around madly trying to catch a glimpse of this performer or that, the programming is usually idiosyncratic (just trying to be polite).

I enjoyed Parklife earlier this year, but that was mainly thanks to finally seeing Metro Area, who managed to do a virtual megamix of 20 disco, proto-house and acid tracks in their foolishly brief one-hour set. The overall line-up included only a few artists who would pique my interest enough to traipse past 20,000 smashed punters to get to another stage, so I stuck mostly to one stage and had a good time. But We Love Sounds, while carrying a star-studded line-up, was a mixed bag with long bouts of ennui (ironically, the afterparty was much better). And Harbourlife was, well, Harbourlife.

I was starting to think that my festival-going days were coming to a close.

But, quite unexpectedly, Days Like This has come along to re-energise my interest in the format. And it has done it by stressing good acts, thoughtful programming and organisational smarts.

Not that I thought that as I arrived, just after 4pm, at Fox Studios. Morcheeba were dishing out a predictably wet selection on the main stage and the South Rakkas Crew were torturing eardrums with their raved up ragga breaks at the garden stage. Worse, they were both running outrageously late (the former apparently because of technical issues).
But it was all better after that. Radioslave decided that he couldn't beat the noisefest that had preceded him and instead set upon locking the now thinning garden stage crowd into one of his patented 4am tribal tech-house grooves. Starting retro with tunes that would've played well at late 80s techno raves, he then pushed us into the summery, conga-filled delights of Michel Cleis' "La Mezcla", and eventually finished with Elkin & Nelson's classic 1979 afro-funk workout, "Jibaro".
He was ably followed by Recloose, who moved from broken beats earlier in his set to some straight-up disco (Love Committee's "Just As Long As I've Got You") and house. Meanwhile, Fat Freddy's Drop were impressing on the main stage with their big band approach to reggaefied deep soulful electronica. Great to listen to and get lost in, but apart from the new addition to their crew (a tiny little kid with a trombone) their visual impact was a little light-on for such a big arena.
Mike Monday managed to get the garden stage going off with warm, melodic, and BIG tech-house, but while he's clearly a crowdpleaser the sound was surprisingly predictable for someone who has produced some excellent tracks in the last five years. It's almost like he's trying to do a cooler version of the more cheesy output of his early career, but then why not just stick with the original?
At the same time Sharon Jones was causing havoc on the main stage, prancing about and delivering some killer vocals. The Dap Kings are one tight nouveau funk band and this was quality stuff, even for someone like me who has never been hugely into the sound.
Then it was time for A Guy Called Gerald. Playing loops off two laptops, he constructed what may have been the set of the day. It was brutal analogology, recalling a past era while sounding fresh and unique. There was DnB, house and techno in equal measure, finishing off with three legendary tunes: his own "Voodoo Ray", former outfit 808 State's "Pacific" and a twisted, dubby remix of Donna Summer's "I Feel Love".
Which of course led perfectly into Carl Craig. Having heard about his legendarily spotty mixing and setlists packed with tired Detroit classics (and only having seen him play live before, on a massive array of analogue technology, in 2000) I was totally won by this densely packed, expertly programmed set with only one cueing error. There were some classics and some of his own productions, but the vibe he created with a jazzified, soulful techno-house jam was a perfect end to the night for me (interrupted by 25 minutes watching PE). Completing the set with his astonishing remix of Faze Action and then the looped tail end of Ron Hardy's brilliant edit of "Let No Man Put Asunder"--the bit that goes "it's not over" over and over again!--left the crowd both getting closure and screaming for more.
It was OK to spend most of my time watching C2, because Public Enemy were firing up the main stage like it was still 1993, when I last saw them. They have retained the energy, showmanship, wall of sound and presence that made them far and away the best hip-hop act of their era. And for those who have never seen them live or were wanting to relive those glory days there seemed little to complain about. But the edginess of that controversial time was missing, not really their fault but because the audience now lives in an era where some of the protest has been subsumed into the election of a Black man as US president. It's a contradictory thing, this mainstreaming of dissent, and PE haven't been able to transcend it in the way their original explosion onto the scene changed the face of popular music forever. That shouldn't take away from their talent, but perhaps it was all a little bit of history repeating...
And the little bits I saw of Mr Scruff and Gilles Peterson also impressed, although they were too short to say much about. But it felt good to know they were there if someone else failed to dazzle.
The crowd was a bit older, fun to party with and clearly into the music on offer. I bumped into at least two dozen people I knew--even my sister in law! The organisation was above average as well, with quick drink lines and enough toilets (as long as you knew about the ones in the Forum). I think the programming, a mixture of the old and new, but most importantly elements of the past being used to say something new, was what made the day so rewarding. Given the pre-event rumours that the event was going to flop (TV ads for a dance festival?!?), I think instead DLT is now the one to beat.
Posted by Dr_Tad at 8:21 PM