Liz and I saw Leonard Cohen last night. A mixed bag but pretty amazing overall. Review up soon.
In the meantime, here's my first ever "proper" review for Inthemix, of the recent Future Classic night at the Becks Festival Bar, which is part of the Sydney Festival each year.
Disco Nouveau @ Becks Festival Bar, 23.1.09
It’s a damn good thing, the re-emergence of disco, and the best sign of its growing influence on mainstream dance music is the fact it had a night devoted to it at Beck’s Festival Bar. Full marks for putting this on must go to Future Classic, who have proven their devotion to the ‘nu’ end of the genre by touring acts like Aeroplane and Todd Terje in the last 12 months.
The evening started well enough for me when I caught the tail end of the Canyons’ DJ set. Mixing classic house styles with DFA style punk-funk was exactly the right spirit. But the groove the boys were establishing almost immediately faltered with Theatre Of Disco taking to the main stage. I’d heard much good about this local outfit, especially their provocative theatricality. However, after an energetic opening number they fizzled into an indie-dance formula that was entertaining enough but failed to lift off, maybe also suffering from being ‘odd ones out’ music-wise on the night.
Future Classic supremo Nathan Macleay then recovered some of momentum by spinning recent nu-disco hits like Todd Terje’s remix of Dolle Jolle’s "Balearic Incarnation", Terje’s own "Eurodans" and Aeroplane’s remix of The Shortwave Set. It was a solid lead-in to Holy Ghost!, who have hit the big time with a fantastic run of remixes as well as their own tracks on DFA Records.
The two New York DJs got the energy of what had been a rather subdued crowd going. It’s a distinctive style they have, staying locked in a 120BPM groove while churning through big hits. Their selections ranged from re-edits of Shalamar’s "Right In The Socket" and Chic’s "I Want Your Love" to original disco like Candi Staton’s "When You Wake Up Tomorrow", and from 80s classics like New Order’s "Bizarre Love Triangle" and Joe Smooth’s "Promised Land" to house remixes of oldies like Prince’s "Controversy" and Talking Heads’ "I Zimbra". It was also nice to hear their excellent production work, especially their remix of Cut Copy and their breakthrough track "Hold On". Perhaps the selections were a little obvious, but they had undeniable dancefloor impact. 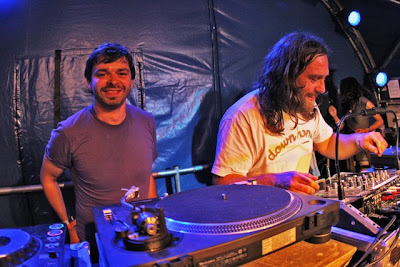 When it came time for the Idjut Boys to hit the decks the audience was pumped, but the Idjuts being what they are meant they were a somewhat divisive force. With a penchant for little known track choices, they smashed straight into the bizarreness of the original version of "Hills Of Kathmandu" by Tantra, fucking with EQs and effects like there was no tomorrow. From there it was obscure vocal disco and italo, acidic monsters and weirdo dubs of tracks like Sylvester’s "You Make Me Feel (Mighty Real)" and Rare Pleasure’s "Let Me Down Easy". Energy they had in spades, but the relatively short set time they had meant there was more choppiness than they could achieve in a longer set, which is their preference (and which they had pulled off in genius fashion at a smaller gig the previous week).
Maybe if Holy Ghost! had been a little more adventurous and the Idjuts a little less, the night could have risen above the sum of its parts. There’s a tension inherent in introducing a mainstream audience to new (old) sounds while still trying to be forward thinking. Without a doubt there were many flashes of brilliance throughout the evening, and it was a very fun way to spend a Friday night under the stars. Just because it didn’t always work shouldn’t detract from Future Classic’s willingness to push boundaries. I look forward to next year’s effort.
Posted by Dr_Tad at 8:00 AM