Here but for the grace of god go I

This is my first attempt at a blog. Please be gentle.

My lovely wife, Elizabeth, suggested I do this because I was already spending hours writing reviews, but not having a stable home for them. In their interest (my children!) I will now give them a roof over their heads and three square meals of public exposure. If anyone reads this thing, that is.

This blog will be about disco (hence the title). But it will also be about other music and about the movies I see. Cinema and music have been my chief cultural passions since I was a teenager, and I've been writing about them on and off since then. There will be other kulturkritik in here also, but the other great interests of my life--psychiatry and politics--will not get a run, except as they impinge on the subject matter at hand.

I think I'm a born critic, which is useful to mask my innate lack of creative talent. My one area of creative expertise is in DJing, but in some ways that is a form of critique or meta-analysis, isn't it? After all, I'm imposing the music of others on an audience. I am the selector, I cut out the bits I don't want you to hear, I present a skewed, adulterated view of a series of tracks, and not as their makers intended them. I force you to see other people's art my way. It's like a review article in a scientific journal, only more fun. So you'll occasionally be subjected to my DJ mixes too.

So here but for the grace of god go I. Which segues nicely into what is a fitting subject for my first post, my favourite disco track of all time. 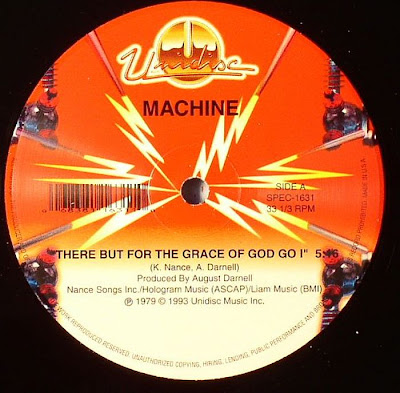 Machine's "There But For The Grace Of God Go I" was co-penned by August Darnell, legendary producer behind Dr Buzzard's Original Savannah Band and probably most famous for the post-disco funk workouts of Kid Creole And The Coconuts. The revived Strut label has recently released a compilation of some of his amazing output, available on CD and for download (although I think the Machine track is only on the CD version).

I first discovered the track on the excellent Jumpin' compilation that came out in the late 90s on Harmless. The point of that CD was to highlight original (and sometimes obscure) disco tracks that had been sampled or remade in the house era, and I had heard the unmistakeable horn riffs before. But the music, as uniquely in your face as it is, cannot prepare you for the charged political lyrics. For those who claimed that disco was only about having a good time, surely this was the riposte. "There But For The Grace Of God Go I" tells the story of bigoted parents who move to the 'burbs to get their baby daughter away from "the blacks, the jews and the gays". Of course, "she turns out to be a natural freak, gaining weight and losing sleep", and then runs off with a guy from the street.

Pete Heller and Terry Farley did a house cover of the tune in the mid-90s under their Fire Island guise, but inexplicably watered down both the confronting language and abrasive musicality of the original, thereby robbing it of most of its impact. Similarly, the repress version we have of the track includes the early 1990s remixes by New Jersey DJ Timmy Regisford, which retain the musical elements but slow the tempo and flatten the arrangement into a more house music style. They are nice but lack the raw power of the original 5:17 minutes.

The track has accumulated meaning for me since I was blown away by it in 1999, when I was first becoming entranced by house music and clubbing. It is Liz's favourite disco track also, and indeed the only record we both own copies of because if we were ever to split the argument about who would get it would likely end in murderous violence. And at a recent job interview I was asked what my favourite dance track ever was. I got the job, and I'd like to think that August Darnell was looking after me that day.