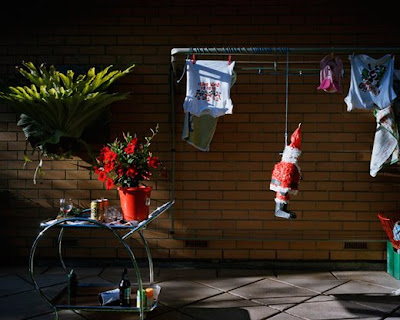 I think there's something to be said for the de-glamorisation of Xmas. And not just the Bad Santa variety, where Billy Bob Thornton played a thoroughly psychopathic St Nick against a backdrop of suburban North American festive cheer. Sure, that punctures the sanctity around what is essentially a major focus of retail capitalism by making its chief marketing ploy into something unsavoury and repellent, but it doesn't get to the real nub of what goes on.
So we have Trent Parke, perhaps Australia's best living photographer, to thank for peeling back the usual layers of warm-heartedness and family spirit with his disturbing and painfully honest exhibition The Christmas Tree Bucket (ACP, Oxford St, Paddington, until Saturday). Here, among his own family's celebrations, he finds all that is banal, frustrating, ugly and, yes, sinister about late December. From the little children clawing at each others' throats to the creepy shadow of a toy Bugs Bunny cast across curtains, from the drawn faces of family members splayed across their beds to the ethereal glow of a television set in the dark, Parke captures something essential: Xmas is not the picnic it's made out to be.
But it's not a case of sneering at his hapless relatives--indeed, Parke includes himself (vomiting uncontrollably into the eponymous receptacle) and his photographer wife, the amazing Narelle Autio, among the wreckage he wants to survey. It's dark but also hilarious and I think achieves powerfully what Parke says he set out to do.... capture not just truthful look but the actual feel of a family Xmas.
Another link:
Posted by Dr_Tad at 6:23 PM