Where Henrik Schwarz is at 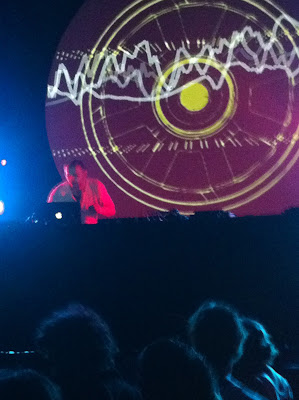 My latest review at Resident Advisor:

Live techno has never been easy to pull off. It upsets the clubland habit of dancers only occasionally paying attention to the DJ as they lose themselves in music. And it's this gap that, with some justly celebrated exceptions, live electronic acts have found difficult to bridge.

This was how I felt about Henrik Schwarz when he last toured Australia in late 2009. His show at Sydney's Civic Hotel struck me as a bit of a greatest hits parade that lost focus and energy at the halfway mark, as though he'd run out of things to say. He substituted bombast for performance when he could have told a tale more clearly his own. It was fun, but nowhere near matching the emotiveness and subtlety of his productions.

To my surprise, his performance for Future Classic at this year's Sydney Festival was a qualitative leap forward. In two-and-a-half hours he seemed able to tantalise as well as pummel, perhaps finding more room to manoeuvre in the expanded setting. Schwarz followed Nathan McLay's favourites-filled warm-up a little after 10:00 PM by opening with deep, thumping percussion before sliding into the Afro-tinged "I Exist Because of You," detouring into the looped house of Tenaglia's "Equinox," and revising Bill Withers into soulful techno.

Unlike 2009, Schwarz wasn't scared to deconstruct his sounds, with sizeable stretches of pulsating low-end, tripped-out hiss, acid squelch and abstract beats. Then it was more African chants (his recent remix of "Kuar"), an interlude of polka-esque frivolity and his rousing reworking of "Think Twice" by the Detroit Experiment, replete with a teasing extended breakdown.

This was just an entree, however, to a middle peak dominated by poppy vocals, including his own "Imagination Limitation" and hysteria-inducing remix of Michael Jackson's "Wanna Be Startin' Somethin'," now intensified with a crunchy acidic bassline. For a moment, the school-night punters exceeded Schwarz's own bouncily fervent stage presence with their excitement.

After the gates were thrown open for free entry at 11:30 PM, he dropped a more soulful and musical selection that included James Brown's "It's a Man's World," his collaboration with Kuniyuki, "Once Again," and the sublime atmospherics of Stateless's "Bloodstream." Then it was time for a finale, which included his Innervisions collaboration "Where We At" and the modern Omar-Stevie classic "Feeling You."

If, in 2009, I had felt that Henrik Schwarz didn't have enough to say, this time he delivered a complex and satisfying story. And even though he was given authorial rights for the night, he also drew us all in as willing protagonists in the narrative.

Tensnake: Not holding back his love


Resident Advisor have just put up my review of Tensnake's live show in Sydney last week:

Thank goodness for Future Classic, who have not only been championing Tensnake's sounds for longer than most in Sydney, but for also making sure his only appearance in the city was not going to be as fine print for the Field Day festival. So as everyone was stumbling toward the end of a long weekend dominated by bloated outdoor events and hastily slapped-together sideshows, here was a little breath of fresh air.

Already heaving when I arrived before midnight, the compact and sonically immaculate venue approached sardine can status as residents Nathan McLay and Chad Gillard built the tempo and feeling. They happily segued between lighter fare like the Dead Rose reconstruction of Gladys Knight's "Taste of Bitter Love," freestyle-esque tracks like Ilija Rudman's "Time and Time," and trippier sounds like Harvey's powerful take on "Rushing to Paradise."

As Tensnake's live setup awaited his arrival on stage at the scheduled starting time of 1 AM, a nervous Chad suddenly popped up asking if we'd seen where the star attraction had disappeared to. The problem was quickly rectified and raucous cheering drowned out the last record of the warm-up. Immediately Marco Niemerski was away with the boogiefied "Get It Right," persisting with the slow build delivered by the residents.

Indeed, the first half of his hour-long set was about as wonderful a revisionist exercise in joyous, soulful, early '80s disco atmospherics as you could hope for through a laptop and Akai controller arrangement. Once he dropped "Coma Cat" at the midway point of his set, though, the subtlety of what he was doing dissipated a little and we were served a more staccato selection of "big" tracks—a dark reconfiguration of "In The End (I Want You to Cry)," the pumping Glossy edit of "Burning Love," the Foals' "Cassius" and finishing on his genre-crunching remix of "Reckless with Your Love." It was all hands-in-the-air stuff, but seemed to come to a halt too quickly—a conclusion drawn hastily by about a third of the punters, who promptly headed for the door.

This was a shame because, once they got over some missteps in trying to recapture the mood post-Tensnake, McLay and Gillard hit their straps with some cool tuneage. At what other club night can you hear Manolo's Celeda-sampling "The Answer" alongside old-fashioned disco-house and Kink's bleepy, acidic "E79" before some banging techno sliding into '80s synth pop? Despite the thinning crowd, those who remained were rewarded with some nice eclecticism, even if the high quality parts were sometimes greater than the whole.