The sun is shining...

OR: THE SONAR DIARIES, PART THREE 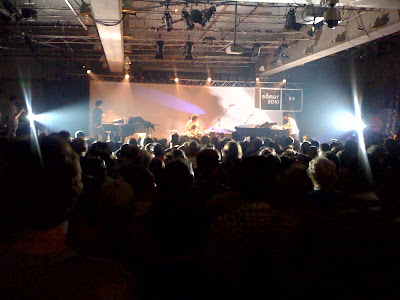 The jetlag, the bloody jetlag. When you stay up to after 5am after virtually no sleep for 28 hours, surely the payoff is a long snooze. But, no, after four hours was all I managed and so I headed off for a late breakfast at Mercat de Santa Caterina and downed two cafes con leche, quickly recalling just how good the coffee is in Spain.

Then it was Sonar By Day, meeting up with my friends Ant and Lisa and their entourage, sitting in the lovely summer sunshine. Sonar By Day is always a mixed bag: art exhibitions, movies, technology demonstrations and musical acts. This year's robot exhibit was very fun, and I saw an American musician knock out a terrific 30 minute acid house set simply by twiddling the nobs on three little boxes produced by Elektron.

I found both DJ Annie Hall and up & comers Nedry a little flaccid for my tastes, and the dubstep oriented goings on in the Red Bull Music Academy also not my scene. But the standout for my brief day at the CCCB (apart from the great Sangria) was Aufgang. This French trio has a German name—roughly translated as "emerging" or "rising"—and their energetic and supremely tight use of their two grand pianos and one drum kit is a sight to behold. Their sound is somewhere between classical music, techno, sweet Air-like pop and storming piano house, but none of those descriptions do them justice. And they've already proven their coolness by getting Barcelona nu-disco wunderkind John Talabot to remix their track "Channel 7". Check them out!

PS Just a little aside, on the way out I watched Booka Shade getting interviewed at the Sonar radio tent and finally got to do the fanboy thing and tell them how great they are. A true groupie moment, and they are such sweet, funny guys.
Posted by Dr_Tad at 10:01 PM