OR: THE SONAR DIARIES, PART TWO 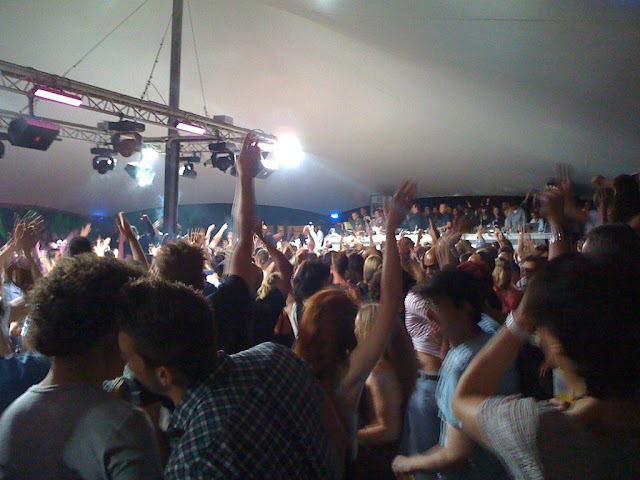 The odd thing about clubbing in Spain is that the clubs tend to be located in the most out-of-the-way spots you can imagine. So, por ejemplo, the techno generation would often drive hundreds of kilometres to massive constructions named for how many km they were located down a particular inter-city highway. Needless to say, the road toll was uncomfortably high at the end of weekend-long benders. Then there is the Monegros Festival, an annual pilgrimage to a remote mountainous region in northern Spain, and featuring some of the biggest names in techno.

It's true even in big cities like Barcelona, and last night I went to the opening of a new venue called Ghoa Beach Club, located just outside the city outskirts on a beach adjacent to Parc Litoral. The occasion was the Desolat off-Sonar label party and the headliners were very impressive indeed: Martin Buttrich, Loco Dice and Marco Carola. It took our taxi driver some time to find the damn place: even the street was not in his navigator device and we bumped into several other partygoers on the way, all searching for the mysterious venue.

Finally we arrived to find an outrageous episode of crowd crush occurring at the front door, with hundred heaving back and forth, some breaking into boos and hisses. The Spanish know how to queue politely. Not.

I had a ticket, but Dave and Andy didn't and we almost turned back but then realised that we would be let in... and when we got inside there was only a small crowd and the whole incident had been about poor organisation. In fact, there were more hangers-on in the spacious DJ area than on the dancefloor at that point, although that would rapidly change as the large space—replete with a massive resort-like pool (briefly used by some brave punters before they were dragged out) and multiple bars—filled comfortably.

Sadly, Buttrich finished his performance just as we managed to get inside and we were treated to an extended warm-up by Davide Squillace. It was a well thought-out and prolonged warm-up set of generic tech-house that helped set the scene but lacked anything really special. But it gave us time to imbibe overpriced mixed drinks (even small bottles of water were 4 Euro) and admire the amazing ability of the crowd to smoke so heavily in the open-air venue that the cigarette fumes were at times almost overpowering.

With Loco Dice on, the music continued in a locked groove, techy fashion without many highlights. But as Andy observed, Dice's drugs must have kicked in at the 30 minute mark and suddenly it was all EQs, filters and effects. He was soon joined by Carola and they pumped out music that would have been positively banal if it wasn't for their ability to play with every effect parameter on a Pioneer DJM-800 mixer and their undoubted ability to read the crowd. It's not that the music was bad, and it was certainly danceable (I managed a lot of grooving despite being stupidly overtired and running on Red Bull), but it was just that big modern European techno sound, pioneered at clubs like DC-10 in Ibiza. In some ways it was musically akin to what Luciano was playing a couple of years ago, but delivered without his panache and talent for layering unexpected elements into the sound.

At just before 5am Andy and I called it a day, just in time to see the first tram of the day arrive at its stop and to catch a taxi with a nice Indian driver who we talked sport with (football and cricket)—leaving Dave to power on for at least another couple of hours.

For a long time in Sydney, Lost Baggage ruled the roost as the premier techno night, pulling high-visibility European DJs who play very much in the style we saw at Ghoa. This party was like the super-professional, highly competent and more pleasantly populated version of a Lost Baggage night, run at a pretty venue with an excited crowd. This is Euro techno clubbing—it's fun but it really may just be the funky house of its generation.
Posted by Dr_Tad at 3:33 AM