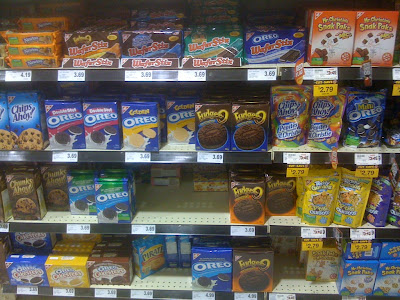 Travelling to North America is always a mixed blessing—it is where the biggest and worst excesses of unbridled capitalism can be seen, but it is also home to some of the most amazing cultural phenomena of our age. Just think about musical heritage of the United States... jazz, soul, funk, disco, electro, house and techno were all born within its borders.
So, off to a psychogeriatric conference in Montreal, and my cousin's wedding in Mississauga (near Toronto) before a brief trip to NYC to see world-class emergency psychiatry services in action, I decided to immerse myself in the good (and naughty) things North America has to offer.
Montreal was certainly a revelation: a modern European city located on the wrong continent. Walking the immaculate streets for hours or even exploring its amazing network of underground shopping malls, metro stations and tunnels (designed to protect you from the elements in both the heights of summer and depths of winter) this seemed such a liveable city, and without the neglect of public services and infrastructure that sadly blights Australia.
Interestingly, Montreal was reputed to be second only to NYC in its late 1970s disco scene—also a polysexual, multicultural, liberal melting pot. So when I hit the second hand record stores there were literally thousands of old 12"s waiting for me, often at stupidly low prices. I even scored a pristine, still-sealed copy of the Doobie Brothers' "What A Fool Believes" in a its rare, original dance remix 5:31 minutes version, among about a dozen other fantastic finds.
The city also seems to have an exciting electronic music scene, again very influenced by its European connections. In particular you can't help wondering if Tiga's Turbo Recordings has been so electro-influenced in part because of Quebec's connections to Gallic culture.
Sadly, Liz wasn't able to accompany me on this trip because of her work, but this city is now top of my list of places to drag her. And those wide boulevards, grid-like street network and fashionable eateries will be sure to tickle her fancy. It's like Melbourne, only much, much better!
In Mississauga for the wedding, I am once again reminded of the problems in North America. The recession has obviously struck Ontario (home to much of Canada's manufacturing base, including the auto industry... don't forget how close Detroit is to here) much harder than Quebec. There's also the size of the cars, the endless miles of freeway and the sense of all-encompassing suburbia. Mississauga itself is a rapidly-growing city—700,000 people at most recent estimate—dominated by shopping malls and towering blocks of condos (think Surfers Paradise but without the beaches or tourist trade).
Nevertheless, my family lives just 20 minutes walk from the town centre in a lovely house with a huge backyard in which they grow their own organic tomatoes and right next to extensive parkland laced with bicycle paths.
So Kris & Steph's wedding was beautiful, with the wry and witty Irish-Canadian Father Kelly on marriage duties. The reception, many hours later thanks to a photography session that by all accounts nearly killed the bridal party, was more of a mixed blessing. There were moments of sheer magic, sheer silliness and sheer torture—but has anyone ever been to a wedding reception without all three? Special shout-out must go to DJ Emporium (his name or that of his business?) who managed to bring tiny speakers for a huge hall and deafen us all. :(
But between wedding and reception was one of the highlights of my trip so far... sneaking off to the local supermarket to get a pack of Oreos and carton of milk with my cousin Anna, and then sitting on the grass by the roadside guzzling both. Spoiled for choice (see photo above) we went for the original type. The best of consumer capitalism, I say!
Off to NYC tomorrow, and to see Francois K spin at Deep Space at Cielo, with the legendary dub poet Mutabaruka on live PA! I'll keep you all posted...
Posted by Dr_Tad at 3:27 AM