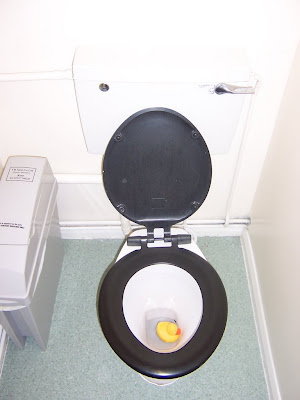 So Dimitri didn't go down all that well...
SHE featuring Dimitri From Paris @ Piano Room & Trademark, 26.06.09

How to explain my disappointment? You see, while never having seen him DJ before, I have been an unashamed Dimitri From Paris fan since the late 1990s when his amazing Mixmag CD was released hot on the heels of his debut artist album, Sacre Bleu. What grabbed me then was his effortless blending of disco motifs with a range of contemporary styles… trippy deep house and electronica on the mix CD and lush, experimental chill-out and trip-hop on the album.

Since then his career has climbed much higher, commercially if not always artistically. The Playboy discs have had moments of crossover genius even if they have often failed to create the same kind of jouissance as earlier efforts. And when looking further back to his underground edits of the 1990s or forward to his ability to oversee retro compilations with a keen ear for both the crowd pleasing and the obscure (that awful Cocktail Disco thing excepted), you just had to admire the guy. Right up to the latest, stunning release, Nightdubbin’, restoring faith for those who thought Dimitri is just a cash cow these days.

Finally, there were the reports of cleverly crafted DJ sets. Yes, sometimes erring on the side of just copying the tracklists of his latest mix CDs, but solid, fun and floor-grabbing performances.

So I think the letdown last Friday was particularly acute. Because, frankly, Dimitri was a bore.

Don’t get me wrong, it wasn’t because he played “too commercial”. There were plenty of tracks I’d never heard. And he could hardly be accused of running a promotional tour for Nightdubbin’—boogie tracks were few and far between. It was that both his sets—disco in the Piano Room and a mixture of big-room disco and house in Trademark—lacked flow, relied too much on bland sounds and failed to create a mood or groove.

So here’s how the night went:

(1) Michael Jackson dies. World in shock.
(2) Get into Piano Room despite lack of collared shirt, lack of my name on their list (thanks Graham, thanks Al the door dude!).
(3) Sound in Piano Room pretty awful beyond the (miniscule) dancefloor. Rammed beyond human comprehension.
(4) Bobby Disco plays nice pitched-down house sound but then makes some mixing fuck-ups. Oops.
(5) Dimitri comes on and plays, barely getting the throng revved up until near the end. Promising start with Sharon Redd’s "Can You Handle It", but then apart from Tata Vega and a little Italo it’s all dullsville until a flurry of predictable big tunes in the last half-hour: "Lady Marmalade", the Todd Terje Bee Gees remix, Diana Ross’ "The Boss", a really awful re-edit of "Relight My Fire" and finishing on "Love Sensation". The mixing is OK, with a correct use of cutting rather than blends, but there’s no drama, no tension.
(6) Danny DeSousa takes over, straight away upping the quirkiness level with David Christie’s "Saddle Up" and Gino Soccio’s "Try It Out", making me realise that this is what Dimitri lacked in his 90 minutes.
(7) Swing into Trademark. Note that this is not the gentrified end of the venue. At least there’s more energy around.
(8) Graham Cordery playing big favourites—"Relight My Fire" (but the good, original version), SHE anthems, Fire Island’s version of "There But For The Grace Of God". Punters lapping it up.
(9) Dimitri comes on, looking more animated than in Piano Room. Crowd just as rammed and floor just as hard to navigate. Starts with piano-house version of "Keep The Fire Burning" before swinging through to Phyllis Hyman’s "You Know How To Love Me", and sending people higher with The Sunburst Band’s classic "Garden Of Love" and Ashford & Simpson’s "Found A Cure". But then he surprises with his new remix of Darryl Pandy’s "Just Came To Party"—all late 80s Chicago goodness—following up with a similarly jackin’ instrumental track and then Alcatraz’ "Give Me Luv" (when was the last time you heard that out?!?). Sure it’s not subtle, but at least there’s a buzz happening.
(10) I trudge home, pondering what went wrong.

So, how to explain my disappointment? Was he in mourning for MJ? Was he jetlagged? Was the venue the right place yet not the right place? You can hardly blame the promoters or the crowd… all reports are that last time Dimitri played SHE he was firing on all cylinders. So, maybe next time.