Same as it ever was? 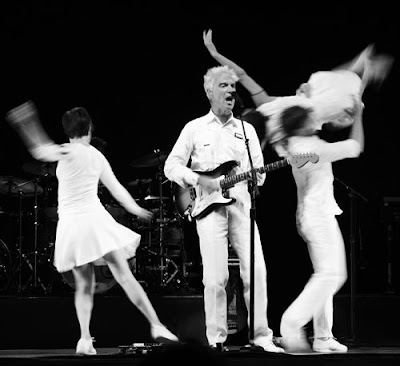 Disclaimer: Talking Heads are my favourite band. Ever. But I never saw them live (their last tour of Australia was in the early 1980s), with the closest I got being Jerry Harrison's tour in 1988. And with David Byrne's later solo work leaving me somewhat cold there wasn't much to pull me to one of his many forays to Sydney.
But in the wake of his new collaboration with Brian Eno, Byrne's current tour promised a focus on all their work together... not just the legendary trio of Talking Heads albums Eno co-produced but their seminal and ridiculously brilliant My Life In The Bush Of Ghosts. So in a last-minute rush of blood I stumped up for a good seat at the Opera House's Concert Hall. And I was not disappointed.
With Byrne, uber-tight band, on-point backup singers and three bouncy, energetic contemporary dancers (!) all dressed in immaculate white, the scenario was visually enticing--although, despite all the onstage action the main man is a performance artwork on his own. Ill-served by some sound problems in the notoriously acoustically-challenged venue (for the first half the music seemed to get lost in the rafters), Byrne nevertheless settled into alternating new material with classics, the vast majority bearing the Eno imprint.
This unfortunately highlighted the limitations of the new album: its winsome folky simplicity lacking the punch of the best Heads material. But it hardly mattered because the classics were more than enough to make up for any hiccups. From when "I Zimbra" was slammed out early, the energy, complexity and drive of vintage-era Byrne were in full evidence.
This was music made for dancing and thinking at the same time--a tougher task than walking and chewing gum, but the essence of New York's early 80s post-punk/post-disco collision. A heady stew of African polyrhythms, indie guitar and jittering melodies, a bridge between CBGBs, the Paradise Garage and early bloc parties, and yet something more. Byrne played the Heads material straight out of the Stop Making Sense handbook, when the band was at the peak of its powers. And dance we did, despite the restrictive seating and overly serious Opera House ambience.
It was great to hear some post-Eno numbers, as well as a track off Byrne's underrated Catherine Wheel soundtrack. And when "Once In A Lifetime" brought the crowd to their feet it was transcendent, the interpretative dancing onstage creating a link between the familiar concert movie arrangement and the bizarreness of the original music video. Through three well-judged encores, Byrne and his crew kept the excitement going and a satisfied audience lapped it up.
There was no nostalgia on the night (Byrne seems averse to such sentiments), and so this trip down memory lane, much like Grace Jones' recent effort, seemed as relevant and immediate as back in the day. Not quite scaling the heights Grace managed (she being blessed with stronger new songs and an unparalleled performative talent) but essential stuff indeed.

Strange Overtones*
I Zimbra
One Fine Day*
Help Me Somebody
Houses In Motion
My Big Nurse*
My Big Hands (Fall Through The Cracks)??
Heaven
Born Under Punches (The Heat Goes On)
Poor Boy*
Crosseyed And Painless
Life Is Long*
Once In A Lifetime
Life During Wartime
I Feel My Stuff*

Take Me To The River
The Great Curve

Everything That Happens*
* Songs from the new Byrne/Eno album
Posted by Dr_Tad at 10:11 PM