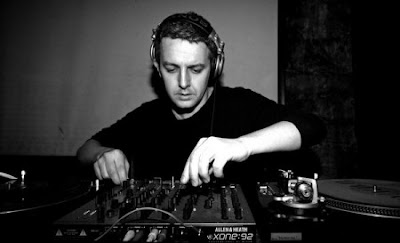 After a small delay in them getting it up on the site, here is my review of Ewan Pearson's latest mix CD on Inthemix (link here or text below).
Despite another night of Sydney summer downpour I ventured out to see Ewan play at the Civic on Saturday night. He was playing a five-hour set and I had to leave halfway through, but you could tell he was going somewhere special with it. As expected his track choices were esoteric, sometimes a little too proggy for my tastes, but he seemed to have beaten the horrors of jetlag to keep a small but appreciative crowd in the groove.
Sadly I won't be seeing him at the Playground Weekender as I am yet to work up the courage for a four-day party session in a rural setting (call me soft, but I'm about to hit the big four-oh and have a day job).
Nice to bump into fellow blogger Shortino. In the silliness of the moment I not only managed to harass the ever warm and friendly Mr Pearson for track names for my compadre, I even tweeted them. #tweetlikerichiehawtin I say!
Ewan Pearson – We Are Proud Of Our Choices
When Ewan Pearson and co-author Jeremy Gilbert wrote their academic text on dance music, Discographies (Routledge, 1999) they drew on influential currents in cultural and political theory from Lacan to Derrida and Butler to deconstruct some of the crude assumptions about the scene held by critical outsiders. But their spirited defence of dance culture, centred in their view around jouissance (how Lacan described a moment of ecstatic reverie bordering on agony) could also puncture the pretensions of some cooler-than-thou scenesters who wanted to reduce the pleasure of the dancefloor experience to the laboured hipness of their own tastes.
Despite his considered curation of the latest mix CD on Kompakt there is very much the pleasure-meets-pain principle about Ewan Pearson’s approach to EDM on display here. It is a mix that sneaks up on you with restraint and a rejection of obvious pyrotechnics yet still manages to deliver a series of dramatic peaks in its 80 minute running time. And it’s a very intimate experience suggesting that, like the old socialist song, Pearson is proud of standing by his artistic convictions. He is no dedicated follower of fashion (the tracklist is almost wilfully obscure) and this gives him the room to stamp a coherent musical personality on a disparate selection of tracks.
Starting in poppy electronica territory with the Gold Panda remix of Lemonade’s "Bliss Out, he is soon traversing delicate tech-house with tracks from A Ldric, Ivan Smagghe & Roman Flugel, and Lusine. Even this early the spare beats serve to structure insistent melodies, rising and falling. But before they can get out of control Pearson shifts the atmosphere into decidedly more moody deep house territory. The hypnotic, breathy spoken word vocals of "Open Our Eyes" continue to hang in the mix, even as the Detroit-flavoured build-up of Neville Watson’s "Full Flight" explodes into frenzied analogue handclaps. Suddenly an unassuming mix is forcing you to take notice.
From here things get techier, stripped back, with more than a hint of dubbiness. But by the time YOSA’s "Margaret" makes its plaintive cry things are ready to take a turn back to big, haunting melodies from Gregor Tresher (a Petar Dundov remix reminiscent of Dosem’s "Beach Kisses"). This is quickly followed by menacing-as-fuck teutonic vocals from Xenia Beliayeva on Systematic and the driving prog of Chris Fortier before further brain-bending house from Al Usher (remixed by rising star John Talabot) and B.d.i. Decisively pummelled with this sustained finale we get a bonus encore thanks to the sweetness of Little Dragon and Bot’Ox, proving once again Pearson’s ear for pop hooks.
Unlike many DJs who use Ableton to simply replay their club performances without the blemishes, Ewan Pearson takes advantage of its tools to reconstruct tracks so they can be blended for a seeming infinity, with small elements transplanted from their usual homes to other far reaches of the mix. This seems to me to be the studio equivalent of his love for combining tracks when playing out not because of any strict stylistic similarities, but rather the sonic and emotional resonances between them.
This prolonged looping creates a trippiness that binds the diversity of ideas on offer into a coherent whole. It also reproduces those endless yet brief instances of being lost in exaltation among the smoke and flashing lights. Moments we want to recapture as if experienced for the first time but discover are now teasingly beyond reach. By eschewing the easy pay-off and seeking out those intensities in more complex movements, Ewan Pearson has created a work of great subtlety but also great feeling.
Tracklist
Lemonade - Bliss Out (Gold Panda Remix) / Pitch And Hold - We Have Come To Bless Dave Smith
A Ldric - Birds On Tree
Rmnvn - Uno
Lusine - Cirrus
Wah Chu Ku - T Times Too
Yukihiro Fukotomi / Foog - Open Our Eyes
Neville Watson - Full Flight
Taron-Trekka - Shiroi
Hot Natured - Equilibrium
DXR - Faderpushing Sunday
Yosa - Margaret
Gregor Tresher - The Life Wire (Petar Dundov Variation)
Xenia Beliayeva - Analog Effekt
Chris Fortier - Sunday Is A Travel Day (Ink & Needle's Skybed Remix)
Al Usher - Silverhum (John Talabot's Wilderness Remix)
B.D.I. - City & Industry (World Balloon Dub Mix)
Little Dragon - Fortune (World Of Apples' Cosmic Edit)
Bot'ox - Blue Steel
Posted by Dr_Tad at 7:11 AM