Trainspotted—ten of the very best 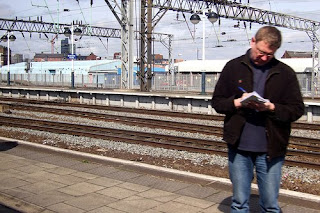 You can imagine I was chuffed when I got asked to contribute a "top 10 tracks of the noughties list" for the Spank Records Blog. So, like, here it is.

Kings Of Tomorrow Featuring Julie McKnight - Finally (Danny Tenaglia's Return To Paradise Mix) (Defected, 2001)
The best mix of the best house song of the noughties, Tenaglia delivers a big room tribal monster that transforms itself into a bittersweet celebration of Julie McKnight’s adoration for God. Danny feels the spiritual love and so do we. Never fails to send shivers up and down my spine.
Josh One - Contemplation (King Britt Funke Mix) (1-Off Recordings, 2001)
Taking an obscure hip-hop track into the deepest of deep house tangents, King Britt teases and plays with the haunting and sexy female vocals, which inevitably spin me into trippy reverie on the dancefloor. That groove could go on forever…
Tiefschwarz - You (Dub) (Classic, 2002)
The track that marked the Schwarz brothers’ transition point between copying US house and staking out their own, harsher, darker electronic style. Having come to electronic music through stateside house (whether discofied East Coast, jackin’ Chicago or trippy West Coast sounds) this track shifted my mindset further afield.
The Rapture - House Of Jealous Lovers (Morgan Geist Version) (DFA, 2002)
Like a shock to the system, DFA melded two NYC aesthetics—the punk-funk of The Rapture and the electronic disco redux being pioneered by Metro Area—in a moment of prefigurative genius. Raw, visceral and immediate, this was one of the early tracks that ripped apart the constraints of genre-specific DJ sets. For me, DFA was the label of the noughties.
Golden Boy with Miss Kittin – Rippin’ Kittin (Tobi Neumann Glove Tension Dub) (Ladomat 2000, 2002)
Probably the best—and definitely the creepiest—pop song of the decade, this should have made Miss Kittin a household name. Instead it’s about as definitive an underground Teutonic singalong electro track as you can get.
Moloko – Forever More (FKEK Vocal Mix) (Echo, 2003)
In Moloko’s dying days they produced this melancholy exploration of loneliness, as if to map their own impending split. But it took my American hero Francois K to bring out the song’s full emotional impact, surprisingly doing it against a decidedly European palette of electronic house sounds.
DJ T. – Philly (Get Physical Music, 2003)
If only the Get Physical of today was the same as the Get Physical of then: a melange of styles and genres created by a friendship circle of talented producers and ideas men. It was this early electro-house track—inspired by the disco and Italo of Thomas Koch’s childhood—that was first among equals in the label’s astonishingly consistent early output.
Black Joy – Moustache (Yellow Productions, 2005)
Before there was nu-disco it was called, er… new disco. Capturing the euphoria of a debauched night in an altogether too glamorous Rimini nightspot in the late 1970s, this sublimely melodic piece of French revivalism takes you high before letting you float back to the ground in a state of bliss. Irresistible.
Hot Chip - No Fit State (Audion Remix) (EMI, 2006)
The scene: a grimy warehouse party in East London. The time: 5am. The mindset: twisted. And so it was that this track insinuated and gnawed its way into my fragile brain, refusing to depart no matter how many times I played it. Dark, disturbing tech-house at its best and an antidote to the soulless, empty minimalism so dominant at the time.
Dolle Jolle - Balearic Incarnation (Todd Terje Extra Doll Mix) (Permanent Vacation, 2008)
Scandinavian nu-disco was a key part of my musical decade, but it reached its apotheosis with this flawless reimagining of an old Jean-Luc Ponty melody, so tender and enticing that the synths wash you straight into its arms. It shouldn’t work on the dancefloor: it’s long and languorous, seeming to lack punch or pay-off. But in fact this is musical foreplay that makes the sex redundant. Radiant.
Posted by Dr_Tad at 11:33 PM